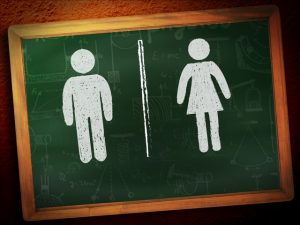 Washington, D.C. (CNN) — The White House is ordered every public school in the country to let transgender students use bathrooms and locker rooms that match their current gender identity.

The Obama Administration has issued the guidance as debate takes place around the country over which bathrooms transgender students should be allowed to use.

The joint letter comes from the U.S Department of Education and the Justice Department.

The directive is not law, though federal officials believe bathroom rights falls under Title-9, the federal anti-sex discrimination law in education.

But the message behind the letter is clear. The government wants schools to either follow its guidance, or face loss of federal funding.

White House Press Secretary Josh Earnest said, “The guidance does not add additional requirements to the applicable law.  The guidance does not require any students to use shared facilities when schools make alternate arrangements.  But what the framework does provide is advice for how school administrators can protect the dignity and safety of every student under their charge.   And that advice includes practical, tangible, real world suggestions to school administrators who have to deal with this issue.”