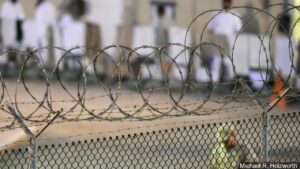 Originally opened in 2002, the facility was meant to be a place where suspects in the war on terror could be interrogated.

But prisoners have been indefinitely detained, many without charges or trial and subjected to reported abuse.

Friday, White House Press Secretary Jen Psaki was asked if the prison would be closed by the time Biden leaves office.

“Well, that certainly is our goal and our intention,” Psaki replied. “In order to see this process through completely and thoroughly, there are a number of key policy roles that still need to be filled within the intervention agency, including sub-cabinet policy roles at Defense, State and the Justice Department, because there are many players from different agencies who need to be a part of this policy discussion about the steps forward.”

About 40 prisoners are still being held at Guantanamo.

Secretary of Defense Lloyd Austin has expressed support for closing the detention center.