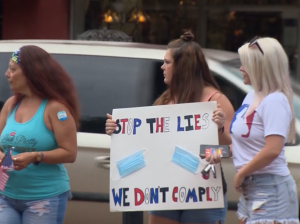 MEDFORD, Ore. — Heated debates have sparked across the country as health officials urge Americans to wear facial coverings to prevent the spread of Covid-19.

But why is wearing a mask such a contentious topic?

And for some, a mandate that tells someone what to do makes them feel powerless.

“Because I feel like you’re trying to dominate me. And I have to feel safe that’s my first concern as an organism,” he said.

Dr. Quinn says some of the outbursts we’ve seen over wearing masks— whether they be physical or emotional — is a primitive response to having one’s self autonomy threatened.

Clinical psychologist Dr. Cody Christopherson says it could also be a reaction to shame.

Shame is a dangerous emotion, he says, making a person feel there’s something wrong with them and who they are is being threatened.

“We have a strong drive to protect ourselves so when those flags go up, the defenses go up and it’s hard to have dialogue and it’s hard to create change because at that point, the person is saying woah, I need to protect myself here so they may become even more entrenched in whatever is going on,” said Dr. Christopherson.

Both psychologists say shame isn’t an effective tool to sway someone’s opinion and get them to comply.

Instead, be respectful and open a dialogue.

“If you look at history, terrible things happen when we split and it becomes about us and them. The more that you can not split off and say this is a bad person to yourself, this is a person, I want to listen, the better chance we have of getting out of this situation with fewer deaths,” said Dr. Quinn.

With the spike of coronavirus cases locally and across the country, health officials say face coverings can save lives.

Doctors say they help keep respiratory droplets to ourselves, which means people who wear them prevent spreading the virus to others.