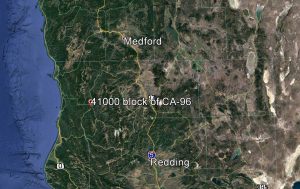 Humboldt County, Calif — Police have identified the individuals who were in a vehicle that crashed down an embankment and ended up in the Klamath River in northern California Monday.

According to the California Highway Patrol, the car crashed down an 800 foot embankment off CA-96 between Hoopa and Orleans Sunday evening. One passenger in the car, identified as 41-year-old Orleans resident Jose Paredes Chaves, was able to get out and climb up the embankment. He flagged down a CalTrans worker who then called 911.

CHP crews were called in to locate the car and save the three people left inside. When they arrived, they found the scene of the crash, but couldn’t locate the car. Some search and rescue crews were able to launch a search in the area, but others were hampered by snow and landslides.

The search continued Monday morning and helicopters were called in to help. By Monday afternoon, they still weren’t able to launch due to the weather.

The driver of the car was in an area hospital Monday afternoon in unknown condition.

As of 9:30 Tuesday morning, a joint effort is underway in attempt to locate the missing driver and children.