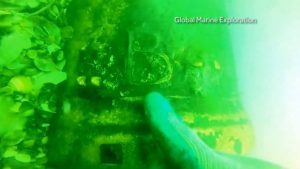 Divers with Global Marine Exploration believe the remains are from three different French ships, and the contents include canons made of bronze and iron, anchors, and symbols of the fleur-de-lis and a French coat of arms archaeologists call priceless.

Archaeologists say the details will be difficult to verify, but they’re likely from the French colonial period around year 1560 and they may have sunk in the midst of a hurricane.

Working with the Florida Department of Historic Resources, the company hopes to bring up the artifacts and conserve them.