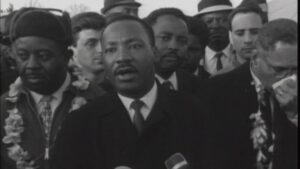 January 18, 2021, is MLK Day, the federal holiday honoring the civil rights leader was celebrated with church services and public service with marches and memorial tributes.

Observed each year on the third Monday in January as “a day on, not a day off,” MLK Day is the only federal holiday designated as a National Day of Service to encourage all Americans to volunteer to improve their communities.

There are no events at the MLK Memorial this year in Washington, D.C. because the National Mall is closed. However, events celebrating the achievements of Dr. King were still held across the country.

King is widely known for his “I Have a Dream” speech where he rallied for better race relations.

Dr. King would have been 92 years old on January 15th.

He was assassinated in Memphis, Tennessee in 1968.