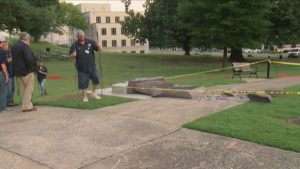 Little Rock, Ark. (NBC News) – A Ten Commandments monument has been destroyed less than 24 hours after it was installed on state capitol grounds in little rock Arkansas.

Video is from Reed’s Facebook page shows him talking, then crashing his vehicle into the 6-feet tall 6,000 pound monument, breaking it into multiple pieces.

Crews were out removing the debris today.

The monument was privately funded and installed Tuesday morning on the southwest lawn of the capitol.

A 2015 law required the state to allow the display near the capitol, and a state panel last month gave final approval to its design and location.

This isn’t the first time Michael Reed has destroyed a Ten Commandments monument.

In 2014 he was arrested for slamming into a monument at the Oklahoma State Capitol.

In that incident the U.S. Secret Service said Reed told them Satan make him crash the monument.

He was ordered to undergo psychiatric evaluation.

Oklahoma investigators said he was bipolar and had been off his medication for quite some time.