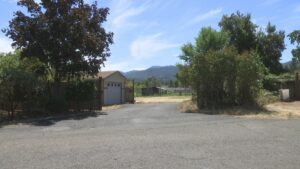 But in an appeal heard Tuesday night, neighbors of the future site say they feel the city isn’t considering potential issues.

“We are ok with it being modified,” said Claudia Van Dyke, a resident. “Just because you’re allowed to put in 12 units doesn’t mean 12 units might be the best number.”

Neighbors on Alicia Avenue just off of Oak Street near downtown Ashland are attempting to convince the city to reconsider a recent cottage housing proposal.

On Tuesday, neighbors made an appeal to the city council about their concerns. Those include the lack of parking, potential hazards in evacuations during emergencies, and failing to meet the city’s cottage housing ordinance.

“They aren’t looking at the impacts on our neighborhood with parking, with sewer,” said Van Dyke.

Neighbors like Van Dyke say they support cottages bringing additional housing to the area and it’s not a case of a “not-in-my-backyard” mentality according to Van Dyke. She says they take issue with what the neighborhood sees as an attempt to cram through the maximum number of people into an area that might not be able to handle it.

“Just because you’re allowed to put in the maximum number doesn’t mean that you have to,” she said.

The planning commission says the nearly one-acre parcel of land will include 12 single-family residences ranging from 800 to 1,000 square units.

After a lengthy hearing, Ashland City Council ultimately denied the neighborhood’s appeal.  The council made one change to allow the installation of a stop sign.

City councilors say neighbors could appeal their decision to the Oregon Land Use Board of Appeals. The planning commission says construction on the site may take another year or two before any ground is broken.