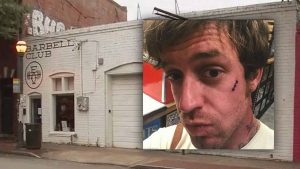 Atlanta, Ga. (WGCL/CNN) – In the East Atlanta Village neighborhood, the EAV Barbell Club is known as the one owned by the guy who hates cops.

Jim chambers made it official when he recently put up a sign that reads, ‘no (expletive) cops.’

He said, “I took it down because of the vitriol that may come toward other people in that space, and we’ll put another sign up that reflects the policy in a more docile tone.”

His policy: Police officers and members of the military are not welcome to work out there.

The self-proclaimed radical tells me believes police officers are violent henchmen of the state. So what does he have against military personnel?

“My belief is that the American state, the American empire is the most destructive and sadistic force the world has ever seen,” Chambers said. “What our Army does is evil, so I don’t want to make somebody stronger so they can go kill Yeminis and North Koreans.”

Ever since the story began to circulate, Chambers tells says he’s gotten a lot of angry phone calls. He says some people have threatened his life.

“I’d say during peak hours, I’ll get a death threat about every 15 seconds,” he said.

Chambers was asked, “Why is that you don’t want police officers and military members in your gym?”

“Couple of reasons,” Chambers replied. “We’re not just a gym. We’re a political space. We have political meetings in this space, organizing meetings, self-defense classes. We don’t make money. We don’t try to make money.”

He confirmed to me he’s the great-grandson of the founder of Atlanta-based communications giant Cox Enterprises.

When asked if he would you consider calling police to report the death threats, Chambers replied, “Absolutely not. Under no circumstances. I would feel more unsafe in their presence.”