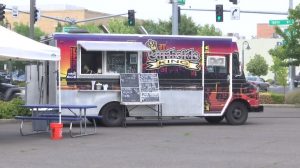 Medford, Ore. — Medford may soon follow in the footsteps of cities like Grants Pass and Eugene, allowing food trucks to operate on city streets.

The council is considering changing city code to allow the trucks to operate in more places like downtown or city parks.

During a study session Thursday afternoon councilors agreed there should be limitations including location and late night hours so as not to compete with brick-and-mortar restaurants. A public hearing will be scheduled soon.