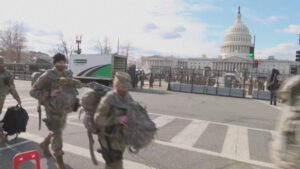 It will be a ceremony unlike any other, taking place in the middle of a pandemic and with security at a level higher than at any point in our nation’s history.

The security perimeter has pushed out further and further from the Capitol. In some spots, there are blockades more than 4 miles out as the city and the nation prepares for the next transfer of power.

The build-up of troops, the building of fences, blocking-off roads and bridges and an unprecedented security presence in the nation’s capital is in place.

More than 25,000 National Guard soldiers and airmen are alongside federal agents, state, and local police as President-elect Joe Biden makes his way to Washington.

Like the core of the city, the National Mall is locked down with flags replacing the hundreds-of-thousands who normally fill the open space for the ceremony, but can’t because of coronavirus and security concerns.

The president-elect will spend time there later Tuesday, honoring the now more than 400,000 Americans lost to the virus.

Framed by the deadly attack on the Capitol, some have suggested carrying out the transfer of power at an undisclosed, indoor location. But organizers say they’re confident the process can continue just like it has for more than 200 years.

Security will remain in place, we now know, through at least the end of the month.

It’s still not clear exactly what the security presence will look like, though we do know it will include National Guard troops on the ground.