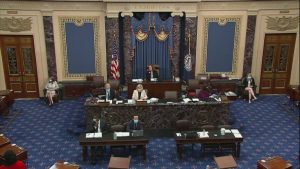 Senator Booker said, “The continued presence of these statues in the halls is an affront to African Americans and the ideals of our nation. When we proclaim this to be not just a place of liberty and justice for all, but as we seek to be a more beloved nation, a kinder nation, a nation of equal respect and equal dignity. It is an assault on all of those ideals.”

The Democrat senators proposed the bill on the Senate floor, asking for unanimous consent to pass the legislation right away. But Missouri Senator Roy Blunt objected, saying it would be a violation of the agreement they have with the states which are allowed to choose which two statues they send to the capitol.

In the end, Blunt suggested he might hold a hearing on the issue, and agreed to discuss the bill further with Booker. Blunt stated, “We just got this bill assigned to the rules committee. It would have the effect of abandoning agreements that we have entered into with the states and the states have entered into with us. I’d certainly like to have some time to decide if we should have a hearing on this. I’d like to see, to get the opinion of people who are taking similar statues out of the building. I’d also like to see what other states have in mind, as they are part of this agreement.”

Senator Blunt is the Chairman of the Senate Rules Committee and has jurisdiction over issues such as these in the Capitol.