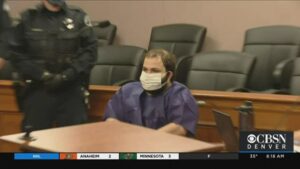 BOULDER, Colo. (NBC) – The suspect charged with fatally shooting ten people at a Boulder, Colorado grocery store has been moved to a different correctional facility.

The Boulder County Sheriff’s Office says 21-year-old Ahmad Al Aliwi Alissa was moved from the Boulder County Jail to another jail outside the county due to safety concerns and threats from other inmates.

He is not due back in court for two to three months after his defense team has more time to assess Alissa’s mental health.