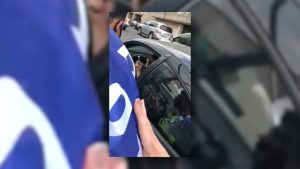 MEDFORD, ORE.– Several locals have been charged with brandishing a firearm toward protestors this month as people stand against the death of George Floyd at the hands of Minnesota police.

While Oregon is an open-carry state, these incidents highlight a grey area of what is considered a Second Amendment right versus a First Amendment right.

Over the past two weeks, thousands have organized across southern Oregon to protest the killing of Floyd, a black man, at the hands of a white police officer.

While much of it has been peaceful, incidents of people brandishing firearms at protestors have popped up.

“It became illegal when they started pointing the firearms at other people,” said Medford’s Chief of Police Scott Clauson. “That’s where they crossed the line. I mean technically they could hold it.”

In Medford, David Westmoreland was arrested after police say he pointed a gun at protestors. This weekend, police say another incident caught on camera showed a woman driving through downtown pulled out her handgun.

Clauson says both were charged with menacing and their firearms were confiscated.

“It’s gonna always be menacing if somebody points a firearm at you and it’s not for self-defense. If it’s more to create fear, it’s clearly menacing.”

But there is still a grey area tiptoeing the line of illegal. In Coos Bay, a man was arrested this weekend for allegedly threatening protestors with a gun.

He was later released. The DA says it cannot prosecute the man without reviewing all available evidence.

While people can carry firearms, actions like threatening someone with them are considered unnecessary unless in self-defense but that could be argued on perspective.

“And they’re gonna have a defensive side as well and they would probably articulate that they felt unsafe and that they needed to protect themselves,” said Clauson.

Police say these cases are handled on a case by case basis that the courts must carefully and diligently review. In both of Medford’s cases, Clauson says it had video evidence that made it clear both people should be charged with menacing.

If a judge finds a suspect used their firearm illegally, they could lose their ability to carry one in the future.