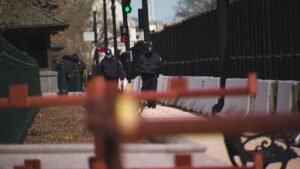 WASHINGTON, D.C. (NBC) – Security around the U.S. Capitol is scaling back.

Authorities have determined no known, credible threat exists against Congress or the Capitol complex.

Fencing was modified over the weekend and will be reduced even more over the next couple of weeks to allow for traffic on Constitution and Independence Avenues.

The razor wire is also coming down.

The presence of National Guard troops has also been scaled back. Guard officials had announced the gradual draw-down of troops in early February.