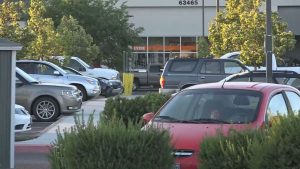 Bend, Ore. – A central Oregon man is facing child neglect charges after police in Bend say he left his 4-month-old infant in a hot car Wednesday.

Police were called to the Home Depot store shortly before noon about a baby, alone and crying in a car seat, inside a car in the parking lot.

The windows were partially down, but temperatures neared 90°.

Officers say they were about to break into the car when the father, identified as 32-year-old Tyrel Rawlins, came out of the store.

The infant was sweaty but not hurt.

Police say an investigation determined Rawlins had been inside the store for about 13-minutes.

They said the internal temperature of the car was at least 99°.