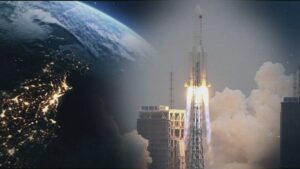 WASHINGTON, D.C. – The government is closely monitoring a situation in space. Debris from a Chinese rocket launched last week is expected to fall back to earth. The problem is: no one is quite sure where it’s going to land.

Thursday morning, the massive piece of space debris is hurtling around the earth. It’s eventually expected to break apart and plummet toward our planet in the coming days.

Typically, similar rockets are designed to safely fall into the ocean after they launch. But experts say in this case, the massive rocket body is falling and will make an uncontrolled re-entry into earth’s atmosphere.

Assistant to the Secretary of Defense for Public Affairs John Kirby stated, “We’re following it as closely as we can.”

U.S. space command says they’re “aware of and tracking” the location of the rocket in space. The agency said that re-entry is expected this Saturday but that “its exact entry point into the earth’s atmosphere cannot be pinpointed until within hours of its reentry.”

Professor John Crassidis studies space debris and believes that despite the uncertainty, you shouldn’t panic. “The chances of you getting hurt by something like this are extremely small,” he said. “And if something is going to happen, there’s nothing that you can do about it. So, just like anything go about your day, don’t worry about it.”

The rocket body is about 100 feet long, weighs 46,000 pounds, and is traveling at over 17,000 miles per hour. However, a big chunk of it is expected to burn off when it hits the atmosphere.

Crassidis said the debris that falls may be closer in size to hail or a book. And experts predict the debris will most likely land in ocean waters which cover about 70% of the Earth.

The Chinese government said something similar, waving off criticism and telling a newspaper there that they believe the carrier rocket will likely fall into international waters. This launch is one of several missions necessary to complete their space station.