WILLIAMS, Ore.– Family from out of state is in southern Oregon this week searching for a missing Williams man who hasn’t been seen in nearly two weeks.

Mark Kirtland, who many know as “Metal Mark”, was last seen on Highway 238 on October 19. This week, his family came up from Los Angeles to help local search parties try and find any sign of him.

As the days go by and the nights get colder though, the urgency to find Kirtland grows and unfortunately, search parties don’t have much to go on.

“If I was in a strange town then I would hope that community would help me,” said Marni Brown, one of the organizers of the local search parties.

Volunteers are looking everywhere they can for Kirtland. The 63-year-old man was last seen walking north on Highway 238 three miles north of the intersection of Water Gap Road north of Williams. 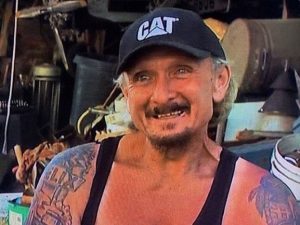 His family says they lost contact with him around that time raising concern something was off.

“Every other week or something he’d call us and, ‘How you doing? How’s business down there in LA?'” said James Kirtland, one of Mark’s sons. “It’s kind of weird – nobody talking to him.”

The youngest of four siblings, James says their father came to Williams from LA about 7 or 8 years ago to retire. They say he showed no signs of mental health concerns or that he might be in trouble.

“He just stuck to his own as far as I know,” said James. “Collected antiques and did community work for everyone around the community.”

Kirtland was a self-employed metal scrapper, according to community members. That’s how he earned the name Metal Mark.

The family called the Josephine County Sheriff’s Office last week after realizing something was off. After they were notified of his disappearance- Kirtland’s 1995 Nissan pick-up truck was found on a residential road near Highway 238.

Brown has been organizing the local search parties to help the family.

“Even if it’s just somebody to come help them look so they don’t feel like they’re just spinning their wheels,” she said. “They need some support.”

The family says they’ll be out here until they get some answers and members of the search parties like Brown have offered to help. But with each passing day, their concerns become direr than they would like to admit at this point.

“You know we’re hoping for the best but expect the worst,” said Brown.

According to the search parties, the sheriff’s office has closed off Kirtland’s house in order to search the area. NBC5 News reached out to the Josephine County Sheriff’s Office for more information.

We received a text from the sheriff saying this was an ongoing investigation and the agency will release information when they have it.