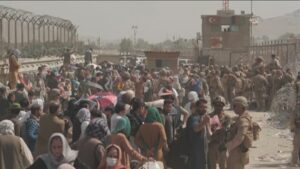 KABUL, Afghanistan (NBC) – The Taliban said Tuesday the U.S. must complete its evacuation of people from Afghanistan by the August 31st date the Biden administration set for the withdrawal of all American troops. The militant group added that it will accept “no extensions” to the deadline.

The clock is ticking at Kabul International Airport, where the evacuations are in high gear. The U.S. only has one week to get this done.

The Taliban said if the evacuations extend beyond August 31st, a date set up by President Biden,  there will be “consequences.”

The Taliban are helping make it go smoothly by providing security outside the airport. But will it be done in time?

It will be extremely difficult to fly out the remaining Afghans and the several thousand U.S. and foreign troops brought in to protect the evacuation in just seven days and the Taliban are undisputedly in charge. They’re on almost every corner in Kabul now.

The old tri-colored Afghan flags still fly. They haven’t been taking them down. They say they want to be inclusive and, so far, the capital is calm.