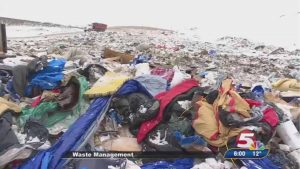 Cannon Ball, N.D. – Sanitation crews in North Dakota are racing the clock to clean up the immense amount of trash left behind by Dakota Access Pipeline protesters before the spring thaw turns the frozen garbage into a toxic mess.

Bismark, North Dakota NBC affiliate KFYR-TV reports crews are making a dent in the mountains of debris, but cleanup is being hindered due to weather. All that junk is now frozen into massive chunks. In a month, it could all become toxic if it melts.

Each truckload of garbage is being inspected by the Morton County Sheriff’s Department to look for evidence of any illegal activities. But they’re also looking for something they hope they don’t find. A MCSD spokesperson said, “As bad as it sounds, we’re looking for people that may have died and could be wrapped up in a canvas or a tarp or tent.”