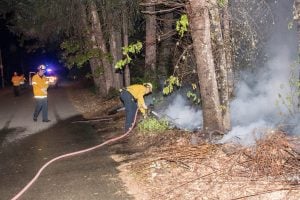 According to the Illinois Valley Fire District, firefighters responded to a grass fire in the area of North Boundary Lane and Lister Street at about 10:00 p.m. on May 10.

People in the neighborhood said a female was seen walking through the area setting trash piles on fire with a road flare.

A few of the fires were set near the property line of Evergreen Elementary School.

IVFD said the arson activity is being investigated by Oregon State Police. They provided no further details about the incident.