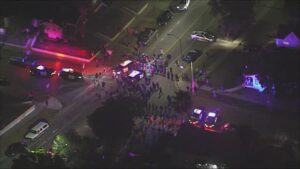 Wednesday night, protesters squared off with California Highway Patrol officers in El Sereno. Officers dressed in tactical gear were there to remove people from several homes owned by Caltrans.

The homes were purchased as part of the now-defunct 710 Freeway corridor expansion. A Caltrans spokesperson said those homes were broken into and are unsafe and inhabitable.

Caltrans asked CHP to remove trespassers so the properties can be re-secured and boarded up, but demonstrators and neighbors urged officers to stop, saying its “irresponsible” and “inhumane” to hoard homes and to kick people out during a pandemic.

At least three people were detained during the protest.

Demonstrators are now calling on Governor Newsom to direct Caltrans to free up the homes for families during the pandemic.

However, Caltrans says they have been working with the local government to lease several of the available properties as temporary shelters.