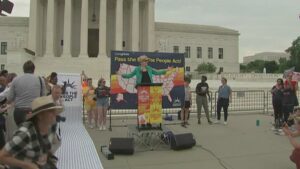 WASHINGTON, D.C. (NBC) – Senate Democrats held a rally in front of the Supreme Court to push for passage of federal voting rights laws.

The “For the People Act” is a sweeping bill that would establish basic voting rules nationwide while also creating public financing of federal elections and a national commission to oversee state redistricting.

The bill not only doesn’t have the 60 votes at present needed to move forward in the Senate, but not all 50 Senate Democrats are on board. Supporters say it’s critical to ensure all Americans equal access to the ballot.

Democrats also support passage of a separate bill, the” John Lewis Voting Rights Act.” That legislation mandates that many changes in state or local elections receive pre-approval from federal civil rights authorities before being enacted.