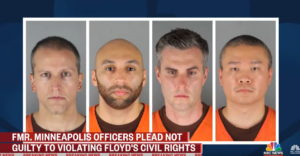 Derek Chauvin, Thomas Lane, J. Kueng and Tou Thao have been indicted by a federal grand jury last may for violating Floyd’s civil rights while acting under government authority.

Floyd was killed in May of 2020 as he was handcuffed and placed under arrest on the suspicion he was using a fake $20 bill to buy cigarettes.

Floyd’s death, captured on video by a passer-by, led to protests against police brutality in the  U.S. and around the world.

All four ex-cops appeared at the virtual hearing via video conference.

Chauvin, who was found guilty in this case and is serving a 22 and a half year sentence, appeared on video from the Minneapolis maximum security prison.

The other three also joined remotely.