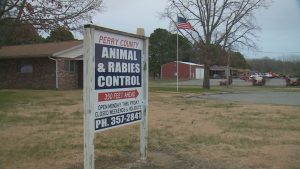 Pinckneyville, Illinois (KMOV/CNN) — Some dog thieves in Illinois have come up with a nasty scheme to get hold of expensive canines. They pose as animal control officers before they go after purebreds.

Dog owners in Pinckneyville, Illinois have a reason to feel this way.

Perry County Sheriff Steve Bareis says a pair of men are stealing dogs as they drive in a white pickup truck and act like animal control officers. “They’ve been taken out of fenced areas and so forth, they’re basically patrolling during the day for them and they seem to be coming back at night or making sure people are gone and taking them at that time.”

So far, the sheriff says three dogs have been taken in Perry County and at least two more in neighboring Randolph and Washington Counties and they’re snatching purebreds.

Amber gulley with the humane society said, “It’s scary but I always tell people you cannot leave your dog unattended.”

Dog owner Carmen Kohout said, “I remember years ago this happened, I didn’t have this guy i had a chow and the same thing was going around and it really scared me, but he doesn’t go out without me.”

That’s the same advice the sheriff has, who says the dogs taken are likely gone for good — sold for quick cash. “Yeah you look at them anywhere from 800 to couple thousand dollars.’

The sheriff adds that at least twice the thieves were scared off by owners, but they’re also likely to keep trying to take the dogs until they’re caught.