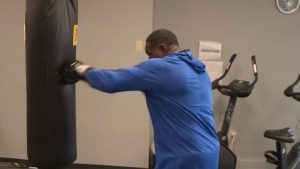 Carlisle, Penn. (WGAL) — Willie Neismith was on his way to a professional boxing career in 1982. He was 20, winning boxing matches at a gym at Pennsylvania’s Dickinson College.

He had a fighting chance to give his mother a life without financial struggle, until a student at the college accused him of rape.

Neismith was convicted and spent nearly two decades behind bars before DNA evidence exonerated him.

Now at 54, he is still struggling, working two jobs while trying to take care of his 6-year-old daughter.

Now, instead of boxing, Neismith is fighting the state of Pennsylvania for compensation.

Neismith has been waiting for years for lawmakers to vote on a Senate bill that would give him and more than 50 other wrongly convicted people  at least $50,000 for every year in jail.

Pennsylvania State Senator Stewart Greenleaf, who introduced the bill to compensate the wrongly convicted says it remains in the Senate Judiciary Committee after being reintroduced four times since 2011. He says the bill has some bipartisan support but a lot of his colleagues have refused to make it a priority.