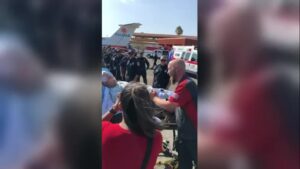 CAL FIRE reports the captain, whose identity has not been released, was flown to San Diego Friday.

The captain was strapped to a gurney but was able to greet and thank dozens of supporters who were on hand.

He was injured when a fire-weakened tree collapsed on him.

Three other firefighters were also struck by the tree, but they were not injured as seriously.

Officials say the captain is expected to make a full recovery, but it will be a gradual process.