CENTRAL POINT, Ore. – Food, football, and firefighting, that’s what these men all had in common this Thanksgiving.

While many are at home with friends and family this Thanksgiving many firefighters are out protecting our community. But they still make time to celebrate the holiday with their second family.

“We’ll be there when you call 911, but at the same time we’re gonna relax a little bit today and enjoy ourselves and respond to those calls,” said Cpt. Don Manning.

Cpt. Manning is a 20-year firefighter for Fire District 3.

“Did I have thanksgiving planned out with my family? Of course, I did! But we postponed it. We have to keep the service out the door and that means me coming in it’s my turn,” said Cpt. Manning.

Now he gets to spend Thanksgiving with his second family something he’s still very grateful for.

“You develop these relationships with the fellow firefighters that they’re special to you. It feels like a brother or a sister at the fire station,” said Cpt. Manning.

But before sitting down to feast they still have a job to do. Between gas leaks and a structure, fire crews managed to sneak in a game of pickleball.

“Spending a holiday with them by any means it’s been pretty fun hanging out with each other we have that family atmosphere,” said Cpt. Manning.

While NBC5 News was out with Fire District 3 the agency responded to a house fire in Central Point. The fire took place at the 200 block of Wilson Rd.

Seventeen firefighters responded to the fire. They said the fire started in the kitchen, but the resident told NBC5 News it wasn’t Thanksgiving-related.

Firefighters managed to rescue a dog that was in the house at the time. There were no injuries reported. 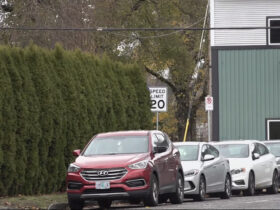