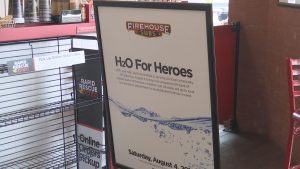 MEDFORD, Ore — Firehouse Subs is continuing their H2O for Heroes campaign to Sunday. The campaign started by Firehouse Subs but it’s the first time the location in Medford is participating.

Anyone who brings in a 24 pack of water bottles gets a free medium sized sandwich.

Richard Summers, president and CEO of RKS Enterprises Incorporated DBS Firehouse Subs, said the event was supposed to end on Saturday, however they extended it until Sunday in the hopes of getting more donations.

“We had hoped for a hundred cases of water, we did get over 50,” he said. “This is our first year so were excited, obviously this will pick up momentum as we go but were going to open it up today for anybody that wants to come in.”

Anyone who wants to donate a case of water for a free medium sub can do so until nine P.M. on Sunday.