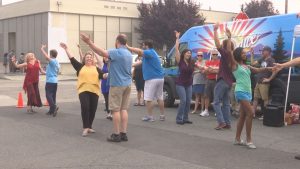 Grants Pass, Ore.- While the smoke has continued to choke the Rogue Valley it didn’t stop one group from having some fun.

As part of an international west coast swing performance, dancers from around Rogue Valley performed a flash mob routine in Grants Pass, Medford and Ashland on Saturday, September 2nd.

The goal – to spread the love of dance and west coast swing.

“It brings such joy and everybody who comes and gets into dancing… you can kind of just see them blossom because dancing is so much fun,” said Melissa McRobbie-Toll, a member of the flash mob. “Also, just these days everything is so divisive and dance is something that brings people together.”

The flash mob is part of a global event that organizes people to perform on Labor Day weekend and all videos of the dances will be compiled into one larger video released later on.