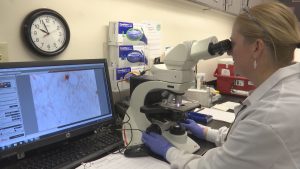 MEDFORD, Ore. – The Oregon Health Authority confirmed Friday two Oregon children have died of the flu this season. One was under ten, the other under five. OHA is not releasing where the children were from.

Meanwhile, the Center for Disease Control confirmed this season is a bad one. It’s keeping lab workers in Medford busy.

But thankfully, days of looking under a microscope to test for the flu are over. Getting quick and accurate results is now easier than ever.

“The other platform we have back here only takes about 20 minutes,” said Traci Craft, lead medical technologist at Providence Medford Medical Center. “The respiratory panel takes about an hour to complete.”

Craft went on to explain, “This technology is more sensitive and specific to the flu so we see less false positives with this testing.”

To start, doctors will swab a person’s nose. Once the results are in, lab technicians put the swab in a machine.

“We load a test strip in this part of the instrument and then we program it and it does its thing, it’s really quite simple,” Craft said.

At the height of flu season, Providence Medford Medical Center says it’s busy with tests. “During the peak, we probably get 25 tests per day,” Craft said.

As for the rumor that this flu season is worse than most, Providence says that’s not what it’s seeing in Southern Oregon.

“I don’t know that we are seeing greater numbers than we normally doing,” Craft said. “We’ve heard reports of people saying it’s been terrible and it’s knocked them out for a week or more.”

But that doesn’t mean things can’t change. When it comes to avoiding the flu, Craft says you have to go back the basics. “Get your flu shot and get it early. People say you can still get the flu but you won’t get as bad of a case if you get your shot and then hand washing is critical.”

If you do have symptoms of the flu, make sure to stay home so you don’t spread the virus.