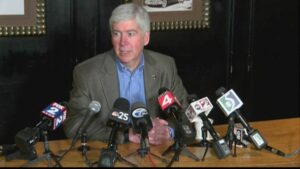 According to the Associated Press, the Michigan Attorney General’s Office has told defense lawyers for Snyder, his health director at the time, and other ex-officials about indictments and to expect initial court appearances soon.

The AP has not confirmed the nature of the charges.

Flint was under state financial management when the cost-cutting decision was made to switch the city’s water supply from Detroit to the Flint River in 2014. The corrosive river water was not properly treated, causing lead from pipes to seep into the drinking water, contaminating the water supply.

At the same time, bacteria in the water was linked to an outbreak of Legionnaires’ disease, which killed at least twelve people.

An attorney for former Governor Snyder did not return calls for comment to the AP.

A spokesperson for the Michigan attorney general declined to comment on the charges to the Associated Press.

The spokesperson did say that investigators were “working diligently” and “will share more as soon as we’re in a position to do so.”