Katie and Aubrey Wright, the parents of Daunte Wright, were moved by words spoken at their son’s funeral Thursday in a Minneapolis church.

The 20-year-old was shot and killed by a now-former Brooklyn Center Police Officer during a traffic stop 11 days ago. 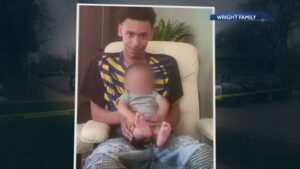 The fatal police shooting happened against the backdrop of the Derek Chauvin trial in the murder of George Floyd, fanning the flames of protest in the Twin Cities area, now a hotbed of racially charged police shootings.

Congresswoman Ilhan Omar read a proclamation which she presented, along with a flag to Daunte’s mother.

Senator Amy Klobuchar of Minnesota punctuated the service with a call to pass legislation to reform policing in America. She said, “I don’t have a proclamation for you to give and a piece of paper. I’ve got a proclamation in the Senate and that is we must pass the George Floyd Justice in Policing Act.”