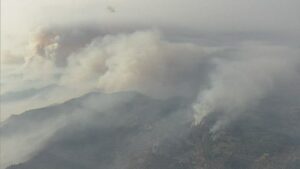 SONOMA COUNTY, Calif. (KNTV) —  The Glass Fire, which ignited in Napa County and quickly expanded into Sonoma County, has grown to nearly 50,000 acres.

More than 70,000 people have been ordered to evacuate as hot, dry winds pushed flames from the fire into neighborhoods and vineyards.

It has destroyed 113 structures, damaged two and is threatening some 8,500 more.

The Glass Fire has sent at least 21 people to the hospital with burns and respiratory issues.

The new fire comes as the West Coast struggles to recover from one of the worst seasons on record.

Wildfires this year have left at least 40 people dead, destroyed more than 7,000 structures and scorched more than five million acres in California, Oregon, and Washington.