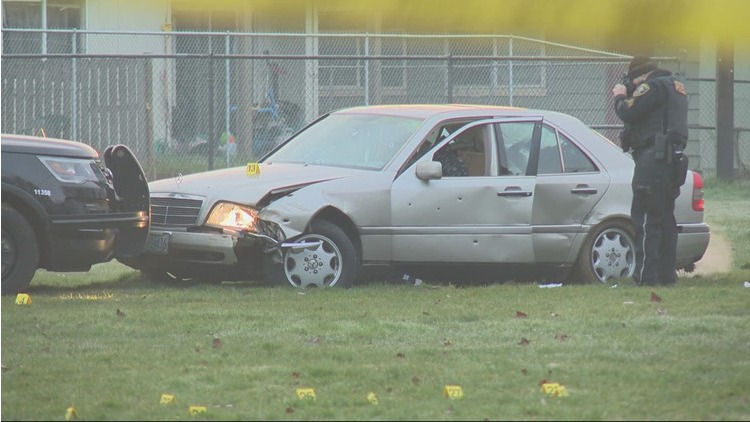 SALEM, Ore. (KGW) — A Marion County grand jury ruled that three Salem police officers who shot and killed a man who brandished a weapon during a Feb. 7 traffic stop were justified in using deadly force.

The officers, identified as Griffin McDowell, Jonathan McNichols and Chad Treichler, fatally shot 40-year-old Richard Meyers after he allegedly tried to flee from police in a gold 1995 Mercedes.

According to the district attorney’s office, Ofc. McDowell had noticed Meyers driving suspiciously, as if to avoid his patrol car, near Hawthorne Avenue and Market Street in Northeast Salem.

When Ofc. McDowell tried to pull him over for a minor traffic violation, he fled northbound on Hawthorne and McDowell followed after him. A short time later, McDowell decided to turn off his patrol lights and stop chasing the suspect due to the risk to public safety. Instead, he coordinated with other officers to use spike strips to stop Meyers.

The DA’s office said Meyers pulled into the parking lot of Northgate Park and began driving across the park in a muddy field. He was reportedly fishtailing and unable to control his vehicle. Multiple patrol cars pulled in after him and attempted to use their vehicles to box in the Mercedes.

“Officer McDowell testified that he was concerned that the Mercedes would continue its uncontrolled attempt to drive across the muddy field towards Fairhaven Avenue, which also connects to the park in an attempt to get away,” the DA’s office said in a news release. “To reach that adjacent road, Meyers would have had to drive across a large field and an area where unhoused individuals tend to congregate.”

McDowell had just used the front of his patrol vehicle to block the Mercedes when he saw Meyers “lean towards the steering wheel holding what looked like a sawed-off shotgun or rifle, pointed directly at Officer McDowell,” the DA’s office said.

This prompted McDowell to withdraw his pistol and open fire on Meyers, who was still in the Mercedes. Ofcs. McNichols and Treichler also fired their weapons toward Meyers after hearing McNichols’ warnings that Meyers had brandished a gun. A total of 22 rounds were fired.

Meyer’s weapon turned out to be a pellet gun with “a lever-pump that swung from underneath the barrel of the weapon, which if held, would be similar to how one holds a sawed-off shotgun,” the DA’s office said.

An autopsy found Meyers was struck by gunfire five times. He was struck in the torso, right upper thigh and right arm. His cause of death was determined to be gunshot wounds of chest. Preliminary toxicology results revealed Meyers had methamphetamine in his system.

Meyers’s pitbull dog Zeeva, who was in the car during the incident, was also shot and was badly injured and subsequently put down.

Meyers had previously been arrested dozens of times. He had multiple criminal convictions, including intimidation; failure to register as a sex offender; public indecency; violating a stalking order; telephonic harassment; assault IV constituting domestic violence; disorderly conduct; and two counts of rape in the third Degree. The crimes spanned from 2000 to 2020.

An investigation found Meyers had frequently talked about suicide, and specifically suicide by police, in the days leading up to his death. His sister Rachel Coble told KGW that Meyers struggled with mental health issues and addiction.

“Regardless of the struggles he had, he was a person and he leaves behind loved ones who really cared and loved him,” she said.

The grand jury did not hear evidence of his prior criminal history before making their decision. They were also instructed to disregard any information that they may have read in the media.

If you or someone you love is considering suicide, please consider contacting a mental health professional. Some services include Marion County’s Psychiatric Crisis Center (503-585-4949) and the National Suicide Prevention Lifeline (1-800-273-8255).