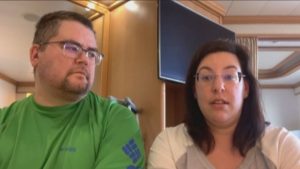 TOKYO, Japan (CNN) – The coronavirus outbreak continues to spread. It’s infected more than 31,000 and killed more than 630 people around the world. Most of the cases have been found in China but there’s a global effort to try and contain the virus.

More Americans were evacuated from China Friday, even as nearly a dozen Americans are stuck on a cruise ship in Japan.

11 Americans on board The Diamond Princess docked near Tokyo tested positive for the virus.

One of those is Forest Grove, Oregon resident Rebecca Frasure. Her husband Kent did not test positive.

Rebecca said, “So while I haven’t really been experiencing any symptoms, I have like a slight cough but nothing crazy. And that didn’t even really start until after I got my throat swab by the Japanese health people that came. I was notified that I will have to be transported to the hospital today within about an hour. Kent can’t come with me because he has tested negative at this point in time. And I may be there for three days to I don’t know how long.”

The number of confirmed cases onboard The Diamond Princess has tripled, bringing the total to 61.

President Trump spoke with Chinese President Xi Jinping Friday about the virus. So far, there are 12 documented cases in the United States.