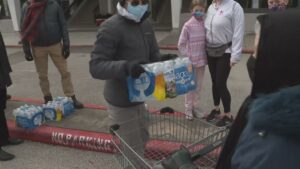 “We’re still looking at some times, probably at the best I would say Sunday, but I’m just going to say Monday,” Turner said. “So we will still be in this boil water status probably until about Sunday or Monday.”

Houston residents Wednesday were warned to boil their water — if they had the power to do so — after water pressure plummeted throughout the Houston-area. Residents are advised to use bottled or boiled water for drinking, cooking and hygiene purposes like brushing your teeth or washing your face until the notice is lifted.

According to the public works department, the city’s water pressure dropped below the Texas Commission on Environmental Quality’s (TCEQ) required minimum of 20 PSI on Tuesday afternoon, prompting the water boil notice.