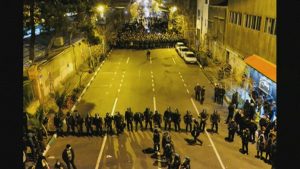 TEHRAN, Iran (NBC) – Iran is warning protesters Monday against using the downing of a passenger jet by the country’s military as an excuse for protests.

Over the weekend, demonstrators took to the streets of Tehran, defying a heavy police presence. They chanted against the government and the military’s Revolutionary Guard.

Demonstrators gathered around Tehran’s “Freedom Square” and at a university in Tehran where people had gathered to remember the victims of the crash.

They said they were upset about their country’s days of denials that it shot down the Ukrainian passenger plane, killing all 176 people on board. Most were Iranians and Iranian-Canadians.

Iran’s judiciary chief issued a warning to protesters Monday, calling them “agents of America and foreign countries.” He said authorities won’t allow anyone to compromise the country’s security.