MEDFORD, Ore. — It was a full house at the Jackson County Commissioners meeting on Wednesday for the first public hearing on the new jail proposal.

Nearly everyone who spoke up was against the idea.

Sheriff Nathan Sickler says the nearly 40-year-old jail has been overcrowded for more than thirty years.

He says Jackson County has one of the largest populations of high-risk offenders who are likely to re-offend again; second in the state behind Multnomah county.

“When we’re releasing people without planning, without services, without a transition plan, we really set them up to re-offend therefore victimizing the community and therefore doing damage to themselves long term,” he said.

Some people we spoke with say they’re not opposed to a new jail, they want more money put into mental health and addiction recovery services first.

“Almost everyone is just simply asking that we look at it again and address the core issues of this county,” said Anette Young, a community member.

“Really what we’re talking about is an enormous, enormous jail. And an enormous amount of money that could be put into other services,” said Jesse Sharp, community member.

Jackson County Commissioners will vote on the proposal at the end of February.

If it passes, voters will see it on the May ballot. 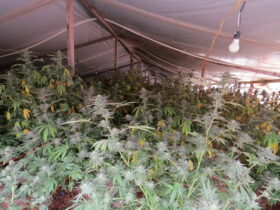