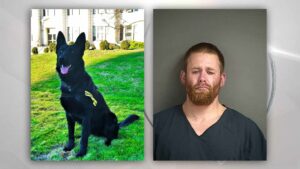 GLENDALE, Ore. – A man with a history of running from police was caught with the help of a K9 unit.

The Douglas County Sheriff’s Office said on Thursday morning, a deputy tried to pull over a blue 2006 Chevy Cobalt on Interstate 5 near milepost 99. Instead of stopping, the driver kept going, leading deputies on a pursuit into the mountains about 5 miles northeast of Glendale.

Eventually, the driver got out of the car and ran down a steep embankment in the woods. That’s when K9 Zoro was called to the scene. He was able to track down the suspect, who was found about ten feet up a tree.

The suspect was identified as 39-year-old Jason Edmund Dangerfield. He was lodged in the Douglas County Jail on numerous charges including attempting to elude police, reckless driving, and unlawful possession of methamphetamine.

This isn’t the first time Dangerfield ran from police. He led Douglas County deputies on a similar chase in late 2018.

This article has been updated with the suspect’s correct name.