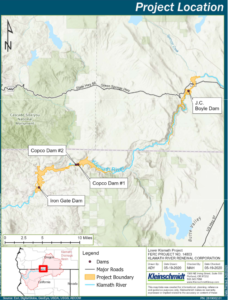 In 2004, PacifiCorp was managing eight Klamath Project dams in Klamath and Siskiyou Counties when the power company was told four of the dams would need to be removed to restore salmon habitat. This would mean the Klamath Project would be operating at a net loss for PacifiCorp.

Eventually, PacifiCorp joined 47 other parties in an agreement to decommission and remove the four dams, contingent on federal legislation. However, that legislation never passed.

In 2016, a settlement was reached on the local level where PacifiCorp would transfer the dams to the Klamath River Renewal Corporation, a non-profit created to take ownership of the dams and begin the process of removal.

On June 17, 2021, the Federal Energy Regulatory Commission approved the transfer, noting KRRC’s ability to remove the dams in an environmentally responsible way, on budget and on time.

According to the KRRC, it should take about 20 months to dismantle the dams and associated features, restoring more than 40 miles of potential salmon habitat.