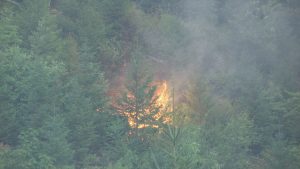 MERLIN, Ore.– The Klondike Fire has continued to expand on all fronts growing to become even larger than the Taylor Creek Fire at about 55,248 acres as of the latest update.

Over the last several days crews have allowed the two to merge at the northern tip of the Klondike, something fire managers say is a strategy to prevent the flames from heading toward homes near Highway 199.

Also over the weekend, the Klondike Fire jumped the Illinois River, with crews saying this is the most pressing area of the fire now.

“We’re working in there. We’ve got crews working to get around that. We have a burn out scheduled for this afternoon,” said Norm McDonald, Alaska Incident Management Team. “Again, the intent of that is to keep that off the private land and the communities. Keep it on the forest.”

No structures have been destroyed by either fire so far and fire officials are continuing to secure lines to protect those living along the 199 corridor.

The Klondike Fire is now at 15 percent containment. The Taylor Creek Fire is at 45 percent.