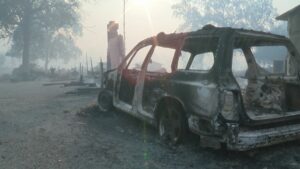 REDDING, Calif. (KRCR/CNN) — What is believed to be the first claim against Pacific Gas and Electric for allegedly starting the Zogg Fire has been filed.

The claim, filed by a Redding, California law firm, is a complaint for property damage and personal injuries. Their client is a family who was forced to flee the fire with their lives in jeopardy.

The fire killed four people and destroyed 200 structures in the Igo-Ono area in Shasta County along Zogg Mine Road.

Many people in rural Shasta County cannot afford fire insurance and lost everything.

Todd Slaughter, attorney with Reiner, Slaughter and Frankel, said, “Quite frankly, the fire is much more devastating than people realize. There were less structures but ranches were destroyed which include entire irrigation systems, fencing.”

On October 9, CAL FIRE took possession of PG&E equipment as part of their investigation.

A court order required the utility to cooperate in the investigation.

The utility has yet to claim any responsibility for the Zogg Fire.