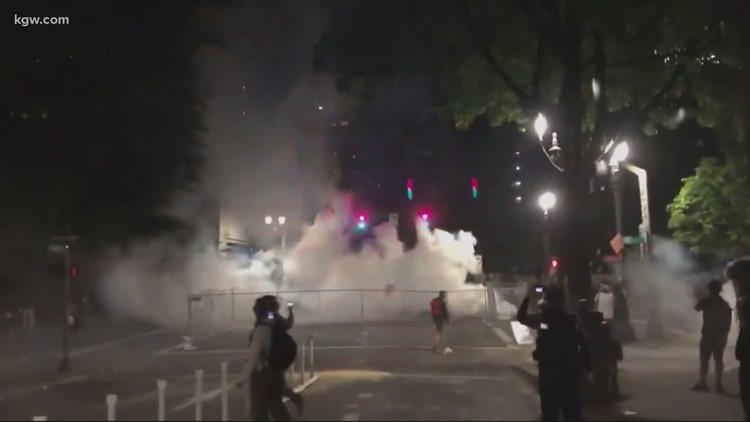 PORTLAND, Ore. (KGW) — The City of Portland has agreed to settle a lawsuit brought by the activist organization Don’t Shoot Portland over Portland police’s use of tear gas and other crowd control weapons during protests following the murder of George Floyd in May 2020.

Don’t Shoot Portland and the Oregon Justice Resource Center, which represented the plaintiffs, announced the settlement in a press release Tuesday, and the city also confirmed the details through a court document filed Tuesday.

“This is a win for organizers and antifascist activists everywhere,” Don’t Shoot Portland executive director Teressa Raiford said in a statement. “Our freedom of expression is the foundation of how we make social change possible.”

The settlement names three additional plaintiffs: Alexandra Johnson, Lester Wresckie and Thomas Dreier. Under the terms of the settlement, the city will pay $50,001 to each named defendant, plus one dollar to Don’t Shoot Portland, for a total of $250,006.

The city will also agree to a 14-month injunction requires the Portland Police Bureau (PPB) to only use tear gas, FN303 riot guns, 40 mm less-lethal launchers, “aerosol restraints” and Long Range Acoustical Devices in a manner consistent with PPB directives and Oregon law.

The settlement also stipulates that “rubber ball distraction devices,” also called flash-bang grenades, may not be used, and PPB will decommission its remaining inventory.

“This mutually agreed result fairly and appropriately resolves the case to provide certainty for all parties,” Portland Mayor Ted Wheeler said in a statement. “There have been many important changes since 2020 concerning the City’s response to demonstrations, including changes to state law and the Police Bureau’s policies, the City’s work toward body worn camera implementation, improved crowd management trainings, the discontinued use of rubber ball distraction devices, and others.”

“Early on in the 2020 protests, Don’t Shoot Portland successfully restrained PPB’s use of tear gas and other harmful weapons on demonstrators protesting police violence,” Ashlee Albies of Albies, Stark, & Guerriero, who represented the plaintiffs, said in a statement. “The federal court later found the Bureau in contempt for violating those restraining orders in the summer of 2020. Now, we’ve succeeded in getting an injunction to force PPB to follow the law, and to dismantle their flash bang arsenal. We will be vigilantly watching PPB over the next 14 months.”