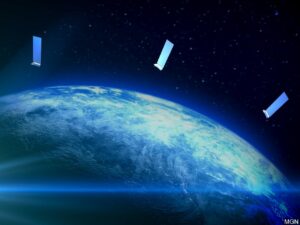 MEDFORD, Ore. – This weekend presents a unique opportunity for people in the Rogue Valley to view what some consider to be a spectacular sight.

Numerous people have called into our newsroom over the last few weeks reporting mysterious lines of lights in the night sky. No, the lights weren’t caused by aliens. They were caused by sunlight reflecting off SpaceX Starlink satellites.

The satellites, launched from the Florida coast, are part of a growing constellation meant to provide wireless internet service across the globe. In a new method pioneered by SpaceX, each launch lofts 60 satellites into low Earth orbit. Once deployed, the satellites use onboard thrusters to slowly separate themselves from each other, creating a train of lights that’s sometimes visible from the ground before sunrise and after sunset.

In the early morning hours of June 19, a group of Starlink satellites was seen crossing over the sky above the Rogue Valley. If you missed it, you should be able to catch the sight again on the nights of June 20, 21, and 22. If you live in Medford or the surrounding area, flyover times can be found here: https://findstarlink.com/#42.3265,North,122.8756,West;3. If you live outside the area, you can input your location’s coordinates here: https://findstarlink.com

You can also track individual satellites at SATFLARE.com.

So far, there are over 400 operational Starlink satellites in orbit around the Earth. SpaceX hopes to launch thousands more in the coming years.

For many worried what a sky packed with tiny glowing orbs will look like, SpaceX said they’re experimenting with making the satellites less reflective and they are only visible to the naked eye during a short period of time when the observer is in Earth’s shadow, but the satellites are high enough to still be bathed in sunshine.