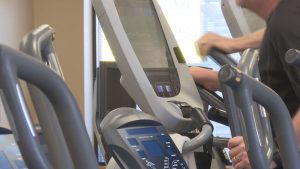 MEDFORD, Ore. — One local gym owner says while he will be following the governor’s orders, he has some concerns about the mask requirement.

Superior Athletic Club’s Jim Kusnerik says requiring Oregonians to wear masks in and out of the gym wasn’t a hard rule to follow.

However, Kusnerik says there could be issues with the new mask mandate.

For instance, when it comes to how much physical exertion you are able to do in a mask and if customers should still wear one if they have a previous health condition.

“Today, I spent three hours searching the internet on scientific data wearing a mask while exercising, what the pros, what are the cons, what are the things you have to be careful for,” he said.

Gyms will also be affected by new gathering limit, which was reduced to 100 people instead of 250.

Kusnerik says that won’t have much of an impact since their customer traffic was already about 60 percent of normal at all three locations.