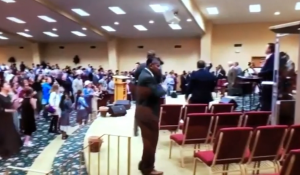 ISLAND CITY, Ore. — “When you are singing, yelling, speaking loudly in a congregate setting with lots of other people… it is the perfect opportunity for Covid to spread,” said Dr. Jim Shames, Jackson Co. health officer.

It was a packed gathering at Union County’s ‘Lighthouse United Pentecostal Church’ in late May.

The event was captured in a video, which was later removed from the church’s Facebook page.

This week alone, over 200 people in the county have tested positive for coronavirus.

Dr. Shames says he doesn’t know the specifics of what went on during the church gathering. But says he heard people were in close proximity not wearing masks and were indoors.

“People keep talking about the protests and how aren’t we afraid of the protest spreading the virus? At least in Oregon a lot of the protesters were wearing masks and they were outdoors,” he said.

Dr. Shames says cases have been on the rise since Jackson County moved to phase 2 in early June.

There was a small outbreak at Medford’s Harry and David headquarters last week with 10 people now testing positive.

Still, Dr. Shames says it doesn’t compare to what happened in Union County.

‘’Not to say we won’t get more cases, we might,” he said. “But I’m not expecting a big blow up because I think there’s too much attention involved to safety in this particular situation.

In the months ahead, Dr. Shames says we must be cautious and stay safe keeping in mind it only takes one gathering to infect hundreds.

“Those hundreds all have families to go back to, they have jobs that they do, they have loved ones, so it doesn’t just stop there,” he said.