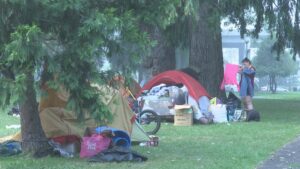 MEDFORD, Ore. — A local man is homeless again after the Almeda Fire.

You can find Robbey Rose and some of the other homeless displaced by the fire at Medford’s Hawthorne Park.

Rose says he was living at the ‘Dun Rov’N R.V. Park’ on the South end of Phoenix.

He says they were trapped in their burning trailer when police had to bust out the window to pull him and his brother out.

“Neighbor’s next door on fire first, then our car then our trailer all in a matter of five minutes,” said Rose. “Thought we were gonna die because there was nobody coming and I was screaming out the door for help.”

The 62-year-old says he’s afraid to think about the future.

He has no insurance, no car, and only a tent.

We’re told many of homeless are now camping in the park and many shelters in the area are nearing capacity.