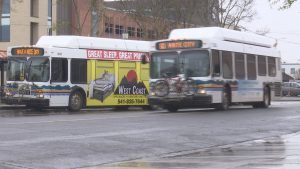 These are the first official cases for this organization.

People who tested positive are under their doctor’s care and are quarantining for the full 14 days, possibly more if the employees continue to feel sick.

“We’ve made it very clear that if an employee comes into work and they are ill and they knowingly come into work they will be disciplined. So we’ve taken it to an extreme, but it’s so important,” said Brown.

While Brown isn’t releasing what type of employees tested positive, she doesn’t believe the public is at risk.

If the outbreak continues she said bus routes could be limited for the safety of the public.

Browns added, if bus riders feel sick they’re asked not to take the bus until they feel better.