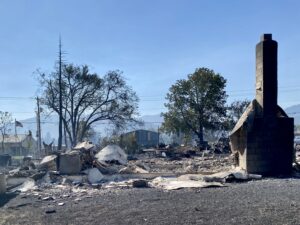 UPDATE September 12, 8:30 p.m. — The Jackson County Sheriff’s Office originally reported five confirmed deaths in the Almeda Fire scar. JCSO later corrected and said after further investigation, one was determined to not be human.

MEDFORD, Ore.  —  Five people were confirmed dead in the Almeda Fire scar, according to the Jackson County Sheriff’s Office Saturday.

The identities of the victims were not released.

“We have been able to determine we believe, that we’ve recovered 5 remains from different locations in the county. Now, these are still preliminary reports,” said Jackson County Sheriff Nate Sickler.

As of Saturday, the fire was 50 percent contained with minimal growth, according to the Oregon State Fire Marshal’s office. Over 100 personnel were working the scenes with 12 engines, three bulldozers and four water tenders.

The Oregon State Fire Marshal says over 42,000 civilians have been affected with 16,000 structures still threatened.

All citizens are encouraged to stay away from the fire-ravaged area.

The cause of the original fire in Ashland remains under investigation. JCSO arrested Michael Bakkela in connection to the second fire which started in Phoenix around 5 p.m. Tuesday afternoon. JCSO said Bakkela is charged with arson, criminal mischief and reckless endangerment in connection with the alleged arson in Phoenix.

Sheriff Sickler said the fire Bakkela started burned homes but he is not sure if it claimed any lives. Firefighters said the two fires did combine and spread.